Digital transformation and technological development bring with them new cyber-threats and risks in the financial sector.  The scale and complexity of these cyber-threats require organizations to collaborate in order to help build resilience and leads to collective action.  Collaborating, financial entities will be able to identify them and react faster.  That is a fact for several sectors, but financial services sector can benefit from Cyber Threat Intelligence (CTI) in additional aspects.  CTI sharing allows banks and CERTs to react and properly respond to:

However, there are some challenges to be solved in CTI for the financial sector.  The ones discussed in the session were:

On the other hand, there are a great number of opportunities identified in the exploitation of CTI data in the financial services that will provide a high added-value to the financial institutions.  A summary was presented in the session, and mentioned hereafter:

CTI can be defined as “any information that can help an organization to identify, assess, monitor and respond to cyber threats”. Therefore, the type of formation that is shared includes, among others:

Nowadays, the number of CTI sources is increasingly yearly as do the number of tools that can consume the data.  This includes multiple actors, ranging from public institutions to industry-focused groups. This shows how different sources and types of information can be shared, and therefore the issues it may have according to each set of data.

In this sense, as the main goal for CTI is to share openly and automatically information, there are several barriers that make it very difficult to achieve, ranging from technical to legal ones.  More specifically, 4 main barriers are identified that need to be covered before a true and really useful CTI platform can be created:

The realization of the CTI sharing process in the financial context involves security and privacy concerns to be considered, such as the sensitive information disclosure, unauthorized access to shared data and manipulation of exchanged information.  To address such issues, our proposal envisages the application of mechanisms designed to enable proper protection of shared CTI data, while the privacy of involved organizations is still preserved.  Accordingly, the proposed solution is composed of:

Furthermore, the main interactions and processes in the proposed solution are the following:

In summary, the proposed system enables a decentralized trusty environment intended to foster the CTI sharing process in the financial sector, with the aim of helping build resilience and collective actions against further cyber-attacks.  Additionally, the proposal integrates privacy-preserving and encryption approaches that allow to properly protect shared CTI, addressing potential security risks that could damage the reputation of involved organizations. Finally, the objective of this proposal is to identify technical gaps and challenges for potential improvements, as well as to collaborate with other pilots to create a cross-pilot approach.

Ramón Martín de Pozuelo received B.Sc. and M.Sc. degrees in Telecommunications Engineering and a Ph.D. in ICT and its Management (all with honours) at La Salle School of Engineering from Universitat Ramon Llull (URL), Barcelona in 2007, 2010, and 2017 respectively. As a researcher in La Salle he participated in several European research and innovation projects related to different fields, especially in the design of heterogeneous data networks and information systems for smart grids and smart cities, and the definition of network architectures, ICT and security solutions. In 2018 he joined as a Project Manager for Technical Fraud Prevention and Security Innovation and Transformation in which he has been managing the participation of CXB in several H2020 projects. Ramón is a Certified Fraud Examiner (CFE, since 2018).

Jose Francisco Ruiz is a senior cybersecurity consultant and technical project manager at Atos. He obtained his bachelor degree and Master thesis degree in Computer Engineering from the University of Malaga in 2008 and 2012 respectively and is currently finishing his Ph.D. focused on cybersecurity engineering. He has been working in European research projects for more than twelve years in different organisations across Europe. He has led cybersecurity research activities and acted as technical project manager in many different projects, among others in: FP6 Serenity (security and dependability for AmI), FP7 SecFutur (security engineering for systems of systems) and Coco Cloud (security in the cloud). He is involved in several H2020 projects as technical project coordinator of VisiOn (security and privacy for public administrations) and project coordinator of FISHY (cybersecurity for supply chain). Previously he was project coordinator of SMESEC (cybersecurity for SMEs) and led the research and creation of a cybersecurity agenda for collaboration of Europe and Japan in EUNITY. His interests include cybersecurity engineering, cybersecurity in the cloud, data protection, and distributed systems. He also has several publications in national and international conferences, journals and books and has served on organisation committees and as a reviewer at different conferences and workshops. Finally, he is a member of the Atos cybersecurity expert community and ECSO’s  scientific and innovation committee  as well as co-chair of the cybersecurity for verticals sub-working group. 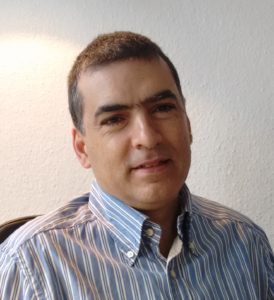 Antonio Skarmeta received a M.S. degree in Computer Science from the University of Granada and B.S. (Hons.) and the Ph.D. degrees in Computer Science from the University of Murcia. Since 2009 he has been Full Professor in the same University.department. Antonio has worked on different national and international research projects in the networking, security and IoT areas, like ENABLE, DAIDALOS, SWIFT, SEMIRAMIS, SMARTIE, SOCIOTAL and IoT6 and is now involved in CyberSec4Europe and BIECO. He coordinates the H2020 project IoTCrawler focusing on IoT advanced discovery on IPv6 networks and OLYMPUS on privacy preserving identity management His main interest is in the integration of IPv6, security services, identity, IoT and smart cities. He has been head of the research group ANTS since its creation on 1995. He is also advisor to the vice-rector of research of the University of Murcia for international projects and head of the International Research Project Office. Since 2014 until 2010 he has been Spanish National Representative for the MSCA within H2020. He has published over 200 international papers and is member of several program committees. He has also participated in several standardisation for the like of IETF, ISO and ETSI and has been nominated as IPv6 Forum Fellow. Dr. Skarmeta it is owner of several patents on telemonitoring-based IoT solutions. He is also CTO of the spin-off company Odin Solution S.L. (OdinS) in the area of IoT and smart infrastructure.