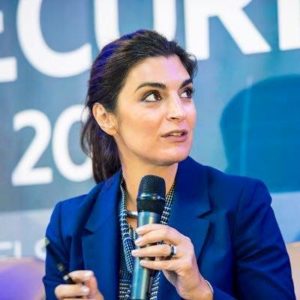 Despina Spanou is the Head of the Cabinet of the Vice-President of the European Commission overseeing the European Union’s policies on security, migration and asylum, health, skills, education, culture and sports.

Previously, she was Director for Digital Society, Trust and Cybersecurity at DG CONNECT. In this capacity, Mrs. Spanou was responsible for the EU’s cybersecurity policy and law, digital privacy, connected cities and mobility, digital health, eGovernment and electronic identification. As Director for Digital Society, Trust and Cybersecurity, she was also responsible for the implementation of the EU legislation on security of network and information systems (NIS Directive) and for the negotiations of the EU Cybersecurity Act, which recently entered into force across the EU. Mrs. Spanou has served as a member of the management board of ENISA, and of the Steering Board of the Computer Emergency Response Team for the EU Institutions, bodies and agencies (CERT-EU). She is a founding member of the Women4Cyber initiative and advocate for the need for more cybersecurity experts in Europe.

Despina Spanou has also been Director for Consumer Affairs at the Directorate-General for Justice and Consumers (2013-2017) in charge of consumer policy, consumer and marketing law, redress and enforcement, and product safety. Prior to this position, she was Principal Adviser in the Directorate-General for Health and Consumers responsible for communication and strategies on managing chronic diseases including the EU’s contribution to the UN General Assembly on Health.

Despina Spanou is a member of the Athens Bar Association and holds a Ph.D. in European law from the University of Cambridge. She is Greek/Cypriot.